The legions of hotel mystery shoppers around the world are just that: a mystery. And, they'd like to keep it that way, thank you. 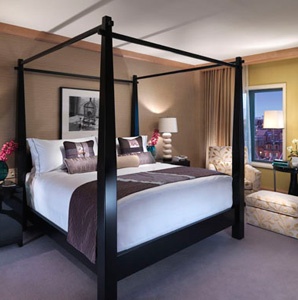 Try finding a hotel mystery shopper willing to dish on one of their stays. Ask them to reveal the dirt on the unkempt suite, the coquette of a concierge, or the wilted flower that sullied the room service tray. You can’t. According to the Mystery Shopping Providers Association (MSPA) there are some 30,000 of them in the U.S., hired by luxury hotel brands to check-in anonymously and judge mercilessly. But like a CIA agent or the rare hair stylist who’ll keep your secrets, gossip is not in the mystery shopper’s after-hours repertoire. Even if they don’t name names, everything they unearth is strictly confidential.

Perhaps it’s to be expected in an industry where everyone, from the booking agent to the bellhop, is famously discreet. If loose lips sink ships, a too-revealing mystery shopper could certainly submerge an hotelier or two. Thankfully, Stephanie Perrone Goldstein, vice president of sales & marketing for the New York–based Coyle Hospitality (whose clients include Starwood Hotels and Resorts and Mandarin Oriental Hotel Group), produced a nine-year veteran willing to answer a few questions. The catch: we would speak by phone, with Goldstein playing watchdog, and the mystery shopper would remain nameless and description-less—more incognito than Brangelina on holiday.

Even by phone, the woman radiated confidence. She’d completed over 500 mystery shops in luxury hotels on four continents, and her voice came through the wires sternly, as if she’d been in upper management a day too long. She works as an independent contractor (paid by the job). What she looks for at each hotel varies from client to client—some brands maintain a checklist of ten things to look for upon arrival, others more than 80. “I pack a measuring tape, because a few hotels want me to get down to the nitty-gritty,” she says. “Is the radius of light emitted from the lamp exact? Is the paint on the walls in a particular palette?” Occasionally, she’ll check in as the most obnoxious breed of hotel guest: the road-weary whiner. “I’ll call the front desk and say the room smells like smoke even when it doesn’t, just to see how they’ll respond,” she says. Fake-outs are staged and executed thoroughly; she’ll go as far as empty the batteries from the remote and grumble about the fritzy T.V., or unhook the chain from the toilet to time how long it takes the staff to fix it. It’s an exacting art. After she checks out, her report is written up, fact-checked by Coyle, and delivered back to the client in a matter of weeks. “My goal, honestly, is to get hotels to provide the highest possible level of service,” she says. “When I return to these properties personally—and I do, if they’re great—I get such satisfaction seeing that.”

In the era of Yelp and TripAdvisor, when travelers can report anything at all to the Googling masses, trustworthy accounts are more important than ever to hoteliers. Coyle isn’t alone in providing unbiased evaluations to luxury brands that clamor for it. Zachary Conen, senior vice president of sales and marketing at LRA Worldwide, a mystery shopping firm based in Pennsylvania, says they maintain a stable of 120 full time consultants who travel 42 weeks out of the year. They too are tight-lipped, but happy to tell you their standards, which alter depending on the client. Is there a seasonally appropriate fruit at the front desk? Did you get a call from the concierge within thirty minutes of check-in? Are the amenities Gilchrist & Soames, and perfectly arranged? Competition for the positions is fierce: you’re required to have three years of management experience in the hospitality industry, excellent written and inter-personal skills, and a credit line of up to $f7,500—presumably for booking your travel, which is reimbursed in its entirety. Once you’re hired, there are other hurdles (namely, weeks of training at LRA University, learning the intricacies of each luxury brand.) The coursework is hush hush, of course, but it may be among the cushiest of educational experiences on the planet. One can picture these people lazing about in hotel robes, fawning over thread count quantities and proper lobby manner with equal zeal.

The concept of sending in a ringer to report back is nothing new. Mystery shopping began in the 1930’s with three men touring the country, staking out Woolworth’s and Kresge’s (now Kmart) department stores. It gained traction during the civil rights era, when the government hired black and white “customers” to investigate the compliance, and the prolific lack thereof, to desegregation laws in restaurants and corner stores alike. Today it’s a $1.5 billion-a-year production, a large chunk of which is travel-based. “In the late 1980’s, Hilton was among the first luxury hotel brands to utilize the service,” says Mike Bare, co-owner and president of Bare International and one of the original founders of the MSPA. Three decades later, it’s common practice among hotel brands around the world. (Proof: LRA recently opened a satellite office in busy Singapore.) And soon enough, its taciturn nature may be over.

“You’ll see the secretive side of mystery shopping change; it’s becoming a vestige of the past,” says Jeff Gurtman, a former executive at both Coyle and LRA and now vice president of brand strategy for Dana Communications, a hospitality marketing agency. The wealth of online reviews has reignited the idea that the customer’s feedback is not only important, but critical to success. Starwood recently announced that it’s allowing guest commentary, both good and bad, on its own websites; and more and more guests are leaving feedback directly on Facebook. “Hoteliers read online reviews thoroughly,” Gurtman says. “If they notice a trend there that speaks to a problem, they have mystery shoppers to go in and test it with surgical precision.” Essentially, they’re hiring people to complain so you never have to. And in the thoughtfulness-driven economy of high-end hotels, that might be the most considerate act of all.

Reply Keenansak
9:52 AM on September 28, 2021
black cialis without a doctor's prescription long term effects of viagra use viagra mode of action when will cialis be over the counter herbal ed pills that work price of viagra at walmart canadian prescriptions online